Last week, on January 12, 2017, we reported that according to Rush Limbaugh, the New York Times was banning the use of the term “fake news”. Today, we learned of a story in the style section of the the Washington Post that appeared on January 8, 2017, calling for the retirement of the term fake news.

The term apparently has been co-opted and used against the Washington Post, NY Times, CNN and other main stream media purveyors of some times fake news for the Washington Post’s liking. Margaret Sullivan, previously a public editor at the New York Times, writing for the Washington Post referenced uses of the term fake news by former Senator Jim DeMint, Info Wars’ Alex Jones and an “arch conservative webstite” (unnamed but linked to Stop the Take Over .org) in her recent column.

For Ms. Sullivan such use by a “tea partier”, a “conspiracy theorist” and an “arch- conservative website”, of the term fake news was enough for her to conclude the term needed to be retired. In the manner of a top PC word police officer, Ms. Sullivan declared that the word fake news needed to removed from the lexicon because it had been co-opted and become removed from its original meaning.

The term “fake news” is not going away. The main stream media weaponized the term fake news and created a Frankenstein. CNN was on the receiving end of a “fake news” truth bomb last week when President- Elect Donald Trump silenced a CNN reporting by calling his organization “fake news”.

Your organization is terrible, Quiet, Don’t be Rude, You are FakeNews

According to Rush Limbaugh, the New York Times will no longer use the term “fake news”. Seems the left’s “fake news” campaign to discredit alternative competing media outlets has backfired on them. Charges of “fake news” began soon after the Presidential election was over as an excuse for Hillary Clinton’s defeat.

Alternative media bloggers and you tubers leveled charges of “fake news” back at main stream news outlets and created their own fake news outlet list that included the New York Times, the Washington Post (for peddling the prop or not and Russian hacking of a Vermont power plant fake news stories) and CNN.

But no “fake news” charge was delivered so decisively as when Donald Trump yesterday silenced CNN reporter Dan Acosta by telling him his news organization was terrible and “fake news”.

It can only get worse from here for the main stream media, so the New York Times has chosen to cut its losses and stop using the term fake news.

Perhaps President Trump can call a reporter “racist” at his next news conference?

Yesterday, we reported that the main stream media wants social media platforms to identify and, if possible, ban what they deem to be “fake news”. The New York Times CEO went one step further in the battle on fake news. In a speech earlier this week to the Detroit Economic Club, New York Times Chief Executive Officer Mark Thompson plead directly to search and social media platforms to do more to help the NY Times and other main stream outlets that report “real news”.

Mr. Thompson also repeated the claim that not only is fake news a danger, but that foreign actors have a vested interest in disseminating fake news. “It is now widely accepted [emphasis added] that it was Russian hackers who broke into John Podesta’s emails and gave them to Wikileaks, beginning the chain of events that led to Pizzagate, ” said Mr. Thompson.

It is also not “widely accepted” that Russian hackers broke into John Podesta’s emails. Theories as to who or how Mr. Podesta’s email was hacked range from a disgrunteld DNC staffer, to a lost phone and an weak password on his Google account. What may be considered as “widely accepted” is that Russian actors attempted to hack a variety of Republican and Democratic Party systems, but no one has been able to say with certainty that John Podesta’s email was broke into by Russian hackers. What the New York Times’ role might be in preventing foreign hacking was unclear from Mr. Thompson’s comments.

Mr. Thompson concluded his speech with a plea that “the big search and social companies must do more to sustain the economics of real journalism.” He also noted that the New York Times would benefit from more paid subscribers arguing that real journalism cost money and “consumer will have to pay for it.”

What happens if not enough consumers want to pay for the New York Times? Does “real news” therefore die? Or, does another news entity capable of turning a profit take their place?

The intercept roundly denounced and referred to as disgusting, the recent Washington Post story that argued that fake news emanating from Russia tipped the election to Donald Trump. The Washington Post recently added an editor’s note to that story in an effort to distance themselves from the conclusions that its cited experts had made.

The Intercept astutely notes in their most recent article on fake news: “Those who most loudly denounce Fake News are typically those most aggressively disseminating it.”

The New York Times, The Atlantic, Washington Post and other main stream media out lets are reporting the “fact” that Russia “hacked the election” based on a CIA conclusion.

The Atlantic notes that the CIA evidence “remains mostly secret”. The Washington Post wrote “the CIA concluded in a secret assessment” that there was Russian involvement in the U.S. election “according to [unnamed] officials brief on the matter”. A New York Times headline blurted “CIA Judgement Built on Swell of Evidence”.

President-Elect Donald Trump’s told Fox News over the weekend he did not believe the CIA conclusion that Russia hacked the election as trumpeted by the main stream media articles and called it “ridiculous”.

The New York Times has warned that Trump’s “mocking of the US intelligence finding” is an “extraordinary breach”. The Washington Post wrote that Trump’s comments set him on course for a showdown with [unnamed] intelligence officials that “some of them describe as the most complex threat environment in decades.”

Undeterred, Trump took to twitter today claiming that if he had lost the election and blamed it on the Russia, it would have been dismissed as a “conspiracy theory”

Can you imagine if the election results were the opposite and WE tried to play the Russia/CIA card. It would be called conspiracy theory!

The main stream media has so damaged its credibility during the last election cycle that if indeed Russia has committed serious acts of espionage, many have trouble believing it when it is reported by main stream media outlets. 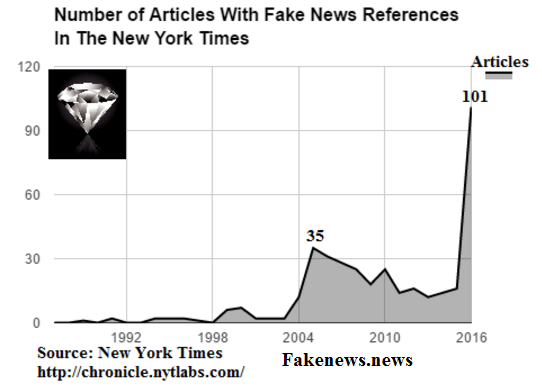 The mainstream media doth protest too much.

The New York Times and the Washington Post have each published stories debunking “pizzagate“, an online independent investigation that points to circumstantial evidence of a pedophile ring involving Democratic party members and centered on a Washington D.C, pizza restaurant. Much of the initial evidence touted by pizzagate researchers has been derived from the John Podesta Wikileaks.

The BBC has joined with the New York Times and Washington Post in rejecting the findings of pizzagate researchers as “fake news” in an article “The saga of ‘Pizzagate’: The fake story that shows how conspiracy theories spread.”

The problem with circumstantial evidence to prove a theory is that each piece of evidence can be easily refuted and missing pieces of evidence can undermine the entire theory. Finding the existence of a door, some chairs and an open field doesn’t mean one has found an ancient stadium. Add more pieces of circumstantial evidence ( a specific location, historical writing, etc) and one can be more certain of an archaeological find.

The BBC also notes that the owner of the pizza shop that is the center of the controversy has “never met Clinton“. Meeting Clinton is not a prerequisite to proving pizzagate. President Obama, the BBC fails to mention in its article, has visited the pizza restaurant at the center of pizzagate. That fact itself proves nothing.

The BBC’s conclusion that pizzagate is fake is based on referencing missing evidence and making inferences regarding its own circumstantial evidence. The BBC has therefore put together an incomplete set of facts and inferences from those facts or missing facts to disprove a theory.

It seems, however, that the independent researchers have spent more time assembling circumstantial evidence to construct their theory than the BBC, NY Times and Washington Post have spent refuting it.

Read the BBC’s Dissmissal of Pizzagate

So Comey and Putin installed a crazy, vindictive can't-handle-the-truth person in the White House. Scary. pic.twitter.com/pr3WPT9HYH

Mr. Krugman has presented no evidence that Vladimir Putin “installed” Donald Trump as President of the United States. Once upon a time if the New York Times printed something, people would assume that while it may have contained bias, that factually it was correct.

Today, it seems bias matters more than facts at many main stream media outlets, which is not a good way of combating alternative media “fake news”.

Wikileaks’ publication of John Podesta’s emails has revealed a series of unexplained coded language that researchers claim lead to a pedophile ring centered around a pizza restaurant in Washington D.C. The alleged scandal has been dubbed “Pizzagate”. John Podesta was Hillary Clinton’s campaign manager.

While the citizen researchers, who until a few days ago had been sharing their findings on a Reddit thread (since removed by Reddit), have not found a smoking gun, their research continues.

The Washington Post ran a story “How Fake News Hurts Real People” The Washington Post story is similar to the NY Times story. Rather than concede that the Podesta emails contain some bizzare language, the Washintgon Post writes the allegations are ‘absurd on their face and detached from any gossamer thread of fact‘ and concludes that those impacted by Pizzagate allegations have claims for defamation.

Rather than reporting and coming up with their own scoops through investigative journalism, the main stream media appears to be relegated to the position of debunking “fake news” and giving legal advice.